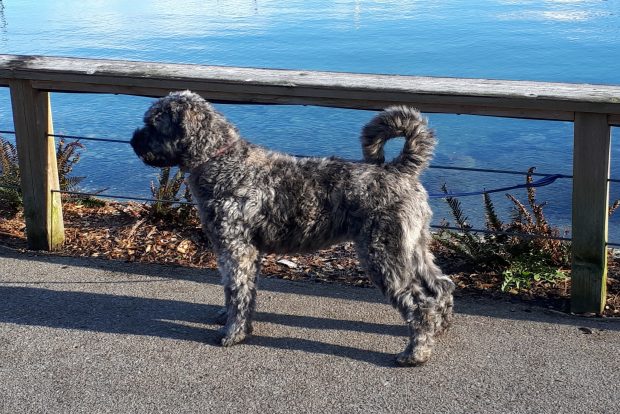 Miss Izzy was my pick female from Rosie’s litter of 2018.  My son took her under his wing and trained her.  Great job Jason.  She is such a sweet caring Bouvier.  She now lives with her foster family in Calgary where she gets to look after her family of two young children and their parents.

Miss Izzy is an exemplary example of what a Bouvier should be.  Unfortunately she will not be shown due to the fact that the CKC breed standard specifies a docked tail.  it is illegal here in BC to crop and dock. Such a shame she will not earn a conformation title.

It is with a heavy heart that I announce that my dogs will no longer be shown in CKC Conformation Shows until such time that the national Bouvier des Flandres Club of Canada changes the standard to allow for dogs with natural tails.

Cosmetic surgery has been banned in some European Countries as early as Jan, 1988. We are talking over two decades of scientific evidence proving that it is unecessary, inhumane and cruel.

I have been on the “Au Natural” ban wagon since 2005. Going against my own convictions and docking tails until it was banned in BC in Oct, 2015.

No more! I am finally taking a stand. And I ask you to do the same. Say No to adopting a puppy from a Bouvier breeder that supports unnecessary cosmetic surgery on their puppies like ear cropping, tail docking and dewclaw removal. Better yet, contact the breed clubs and CKC and make your position known. 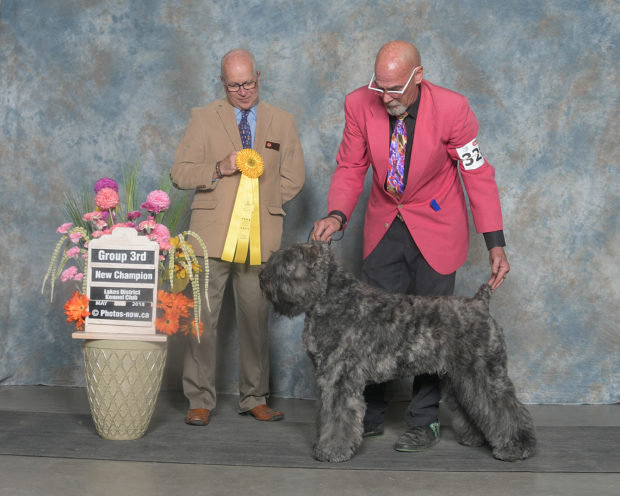 Miss Rosie was my only female from my Dolly x Gus litter of 2016.  Thank goodness she made the cut and went out on the road with Larry Clark for a few short months in 2018 to get her championship title in conformation.  During her very short show career Miss Rosie racked up 6 Best of Breeds, 4 Group 3s, and a Group 2.  Thank you Larry!

Miss Rosie lives in Port Alberni with her co-owner Jan, who keeps her busy in obedience and scent work and soon she will start carting. 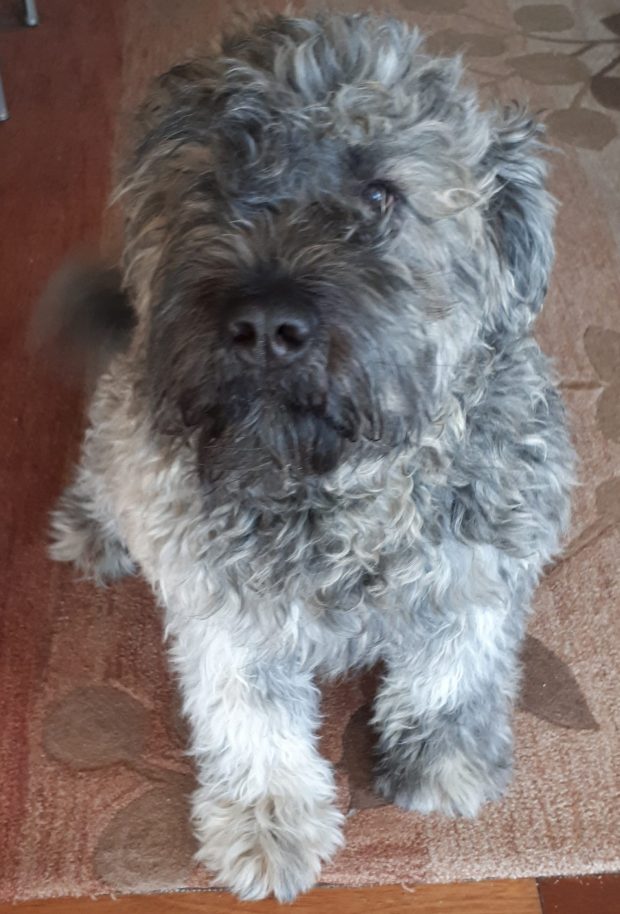 Miss Jiida was my pick female from Tuesday’s litter of 2018.   She is a very busy party girl.  Her favorite thing to do is to  run circles around all the other dogs and she loves to jump over them.  Miss Jiida is an exemplary example of what a Bouvier should be.  Unfortunately she will not be shown due to the fact that the CKC breed standard specifies a docked tail.  And it is illegal here in BC to crop and dock. Such a shame she will not earn a conformation title.

Members of B.C.'s College of Veterinarians have voted to ban cosmetic tail docking of dogs, horses and cattle. The college says the more than 91 per cent of members who took part in a recent vote cast ballots against tail docking.

Such wonderful news for our breed. Now we just have to wait until the breed clubs get on board and change the standard for our breed. Starting today all puppies reared by myself will be adopted out OH NATURAL! Hence, if you are looking for a cropped, docked or cropped and docked puppy? You need NOT apply.

Personally, I have been waiting for almost 15 years for this WIN. Patience is a virtue!

On October 28th, 2015, the College of Veterinarians of BC voted to ban the cosmetic procedure of ear cropping.

Did you know it’s illegal in Europe to do cosmetic surgery on dogs? Here at Breugel our dogs and puppies come first and as such we will not crop ears nor dock tails. Nor will we sell a puppy to anyone wanting to do so.

Please join our plight and say NO to ear cropping.

Do it for the dogs sake! 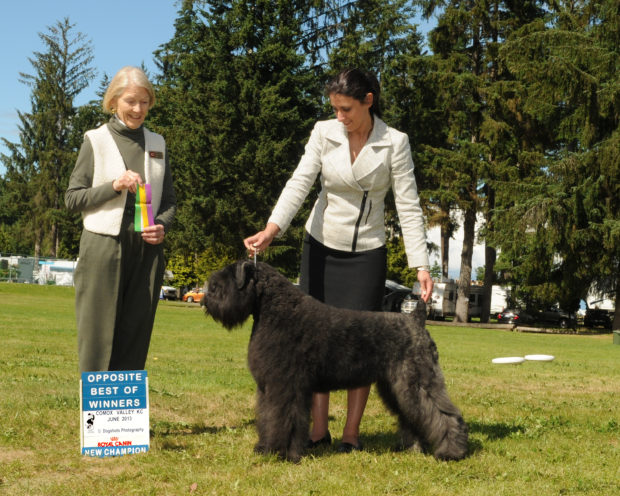 Ch. Breugel’s Bell of the Ball sat on 9 points waiting for some much needed competition to get that last point for her Canadian Championship. – Thank you Lydia for showing the little lady.

Thank you Karen for keeping her in show coat. I see the clippers on the horizon! 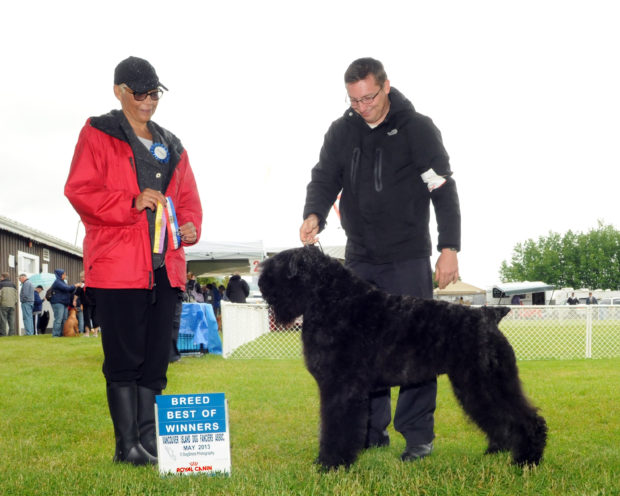 Can Ch. Angelbrin MovlikJager Breugel gets his Canadian Championship in a few limited shows in BC. Thank you Aaron Andrish and Jenna Lostale for showing my boy.  Thank you Carolyn for letting me take Jag on the road with me. 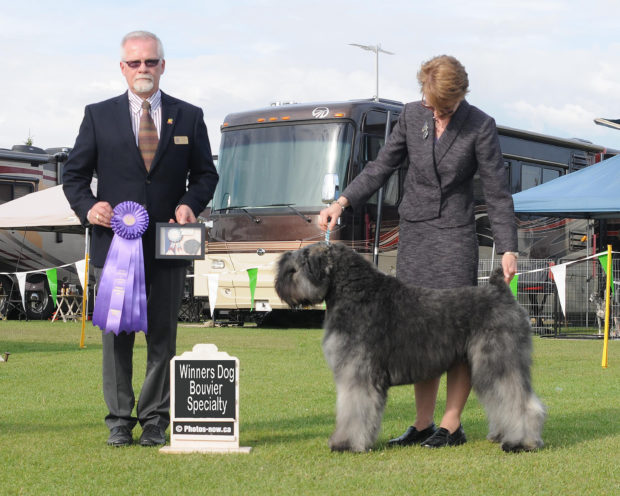 Breugel’s Black Fire Maverick gets his Canadian Championship in just three shows finishing off with Winners Male at the Alberta Bouvier Specialty.  Thank you Connie Krohn and Trina Neil for handling my very special boy.  Thank you Steven and Deb for maintaining his show coat. 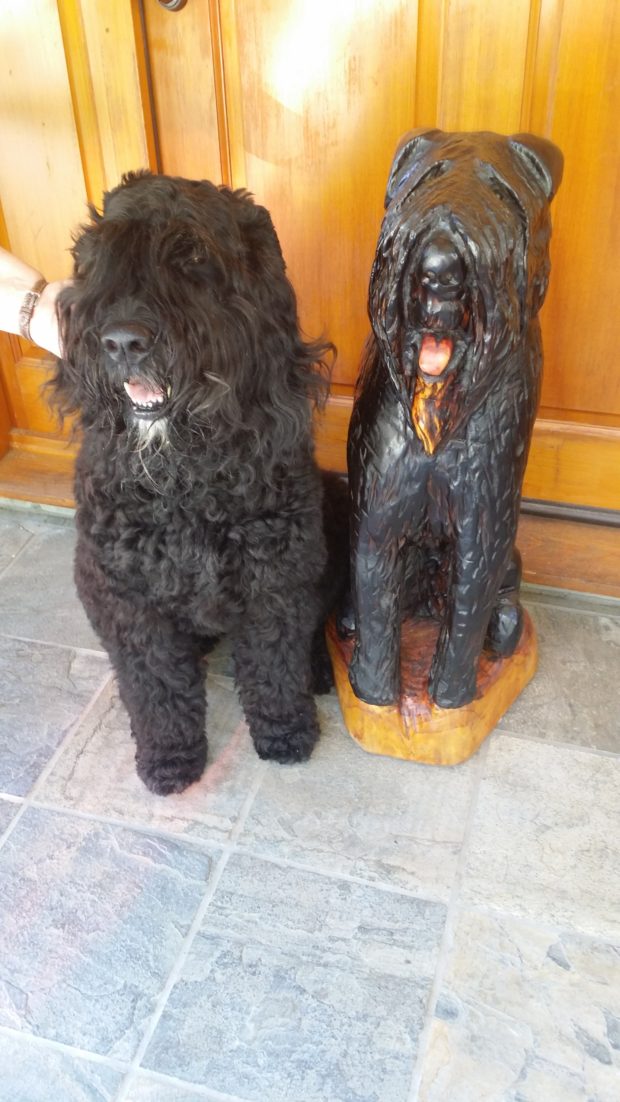 Not too shabby. Way to Go Mamma Jan! 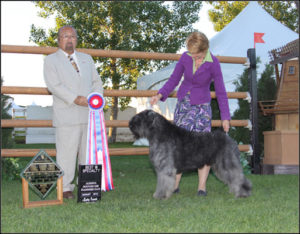 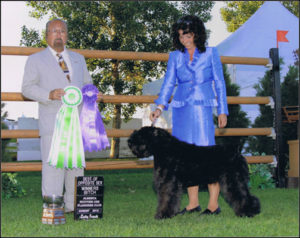 His sister Can Ch. Breugel's Torres at Angelbrin takes Best of Opposite and Winners Female at the Show. 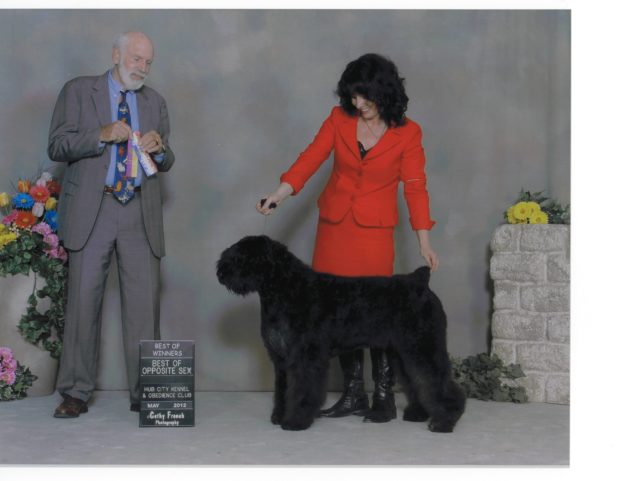 Can CH. Angelbrin’s Lola at Breugels racks up 9 Best of Breeds in her very limited 2 month show career. 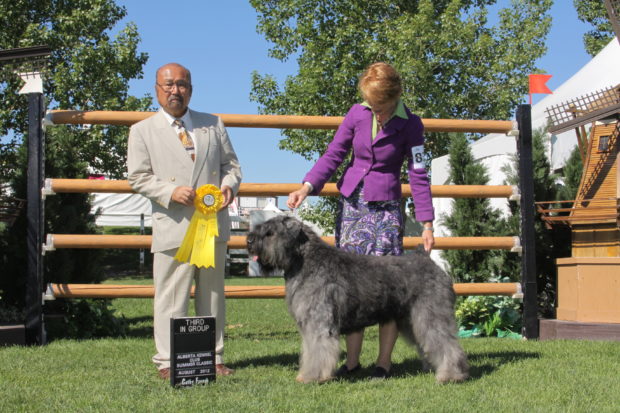 CH. Breugel’s Mystical Marcus completes his championship with 8 BOBs and a Group 3 in just 2 months of limited showing. 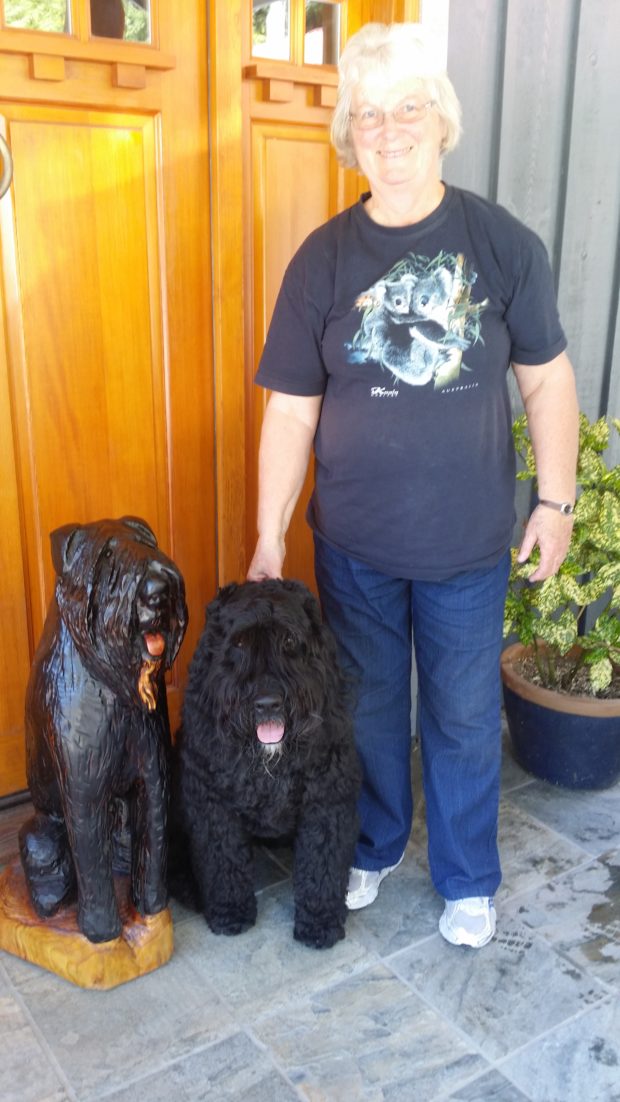 Palay Ain’t No Angel Breugel passes her Herding Instinct Test first time out with flying colors!! What a girl.

Not too shabby for a dog that has never seen sheep before! Way to Go Mamma Jan! 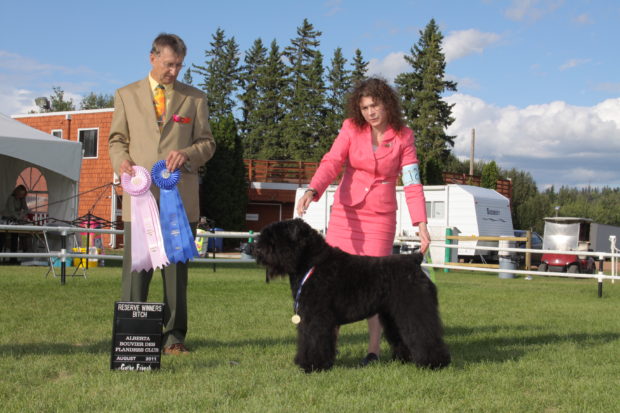 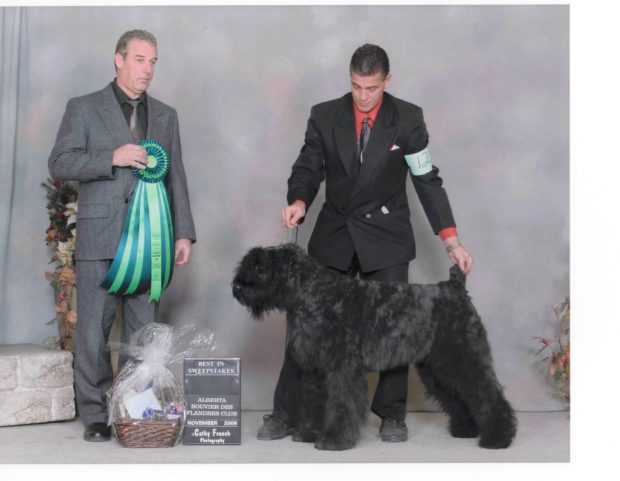 Way to go Deb and Les!

Way to go Chad and Andrea! 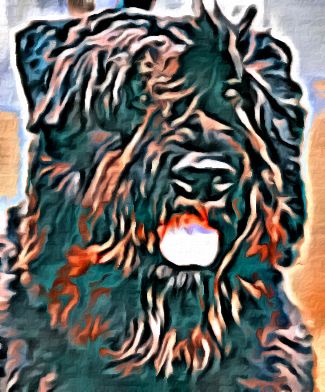 Blaze goes Best of Breed for two consecutive days at the Alberta Kennel Club dog show, finishing his championship in just two shows at the early age of just 9 months.